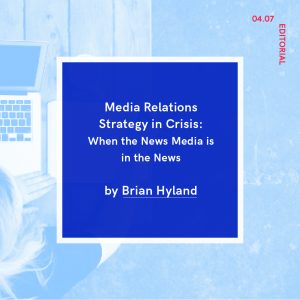 Our media relations strategy was all set… our client had a unique story to tell; the pitch was solid; we had conducted research on the outlet, settled on the best method and timing for outreach. We even sent a book by mail to the producer before placing a call, as is the preferred method. Then, the afternoon I was planning to call the producer (at WNYC Radio’s “Leonard Lopate” Show), The news broke that the host had been suspended – and eventually fired – for “inappropriate conduct.”

What’s more, our team had just recently come to grips with the fact that we could no longer pitch the Charlie Rose Show – which was taken off the air entirely due to allegations of sexual harassment against the host. Then, Matt Lauer hit the bricks, along with a half-dozen additional media personalities such as NBC’s Mark Halperin, NPR’s Michael Oreskes and The Atlantic’s Leon Wieseltier.

So, the question remains, how can companies (and PR pros) succeed at media relations when the media itself is in the midst of a crisis that might be distracting its own reporters and staff?
How to Succeed in Media Relations Strategy When Media Itself Is In Crisis:

If we’ve learned anything about media relations strategy, it’s that we need to roll with the punches. If we can figure out how to pitch to national outlets following (or during) the O.J. Simpson trial, the 9/11 Terror Attacks, the disappearance of Malaysia Airlines Flight 370, “fake news,” and the “Trumpocalypse,” we can get through a few high-profile media personality scandals.

Here’s the secret – change NOTHING! Pitch the way you’ve always pitched: to the beat! I can almost guarantee that the “small business” and “financial news” reporters are not assigned to write ad infinitum about any national tragedy or scandal (even at his or her own outlet). Even if they choose to write a story or two that connects the breaking story to their beat (e.g. “The financial impact of scandals in the media industry”), they will still need to file two to ten more stories that week or month.

Why shouldn’t one of those stories include or focus on your client’s news? Better yet, since it is likely many of your counterparts (who are pitching competitive stories) are also debating whether or not to pitch this outlet, you have an opportunity to get ahead of the crowd. While they are waiting and wondering, you have an opportunity to get your client noticed and have their story told. But you have to keep pitching!
The Show Must Go On!

Additionally, despite the loss of key reporters, producers and hosts, even to scandal, media outlets still need to produce content. WNYC replaced the Lopate show with “Midday on WNYC,” featuring a rotating cadre of hosts. PBS inserted “Amanpour” into the timeslot formerly occupied by Charlie Rose (and is planning to add a new public affairs show soon), and Hoda Kotb was quickly cemented as the permanent replacement to Matt Lauer on NBC’s “Today” show. Other shows will come, and new hosts, anchors and reporters will gladly fill the empty seats. Our job is to pitch the client and their story. As long as there is someone reporting the news, we have a chance at success.
Media Relations Strategy Is a Numbers Game

In the end, after waiting a day or two for the dust to settle at the network, I did place a call to the WNYC producer, who politely thanked me for the book but declined the interview. However, the relationship is still solid and when we have a new client or angle to pitch, we will reach out. And if that producer leaves for any reason, we will find a new contact. Media relations is a numbers game, and we can’t stop pitching just because there is a distraction. Instead, we can use the opportunity to pitch while others are sitting on the sidelines.

About Brian Hyland: A professional corporate “storyteller,” Brian has more than 21 years of experience in media relations and corporate strategic communications in a variety of industries including finance, healthcare, technology, consumer products and nonprofits. As media director, he works with the Stern team and its clients to identify and apply the latest media relations trends and tactics to secure high-quality media placements and thought leadership opportunities. Off the clock, he creates his own stories with his wife of 10 years and two young children.

The foregoing is a guest post from Stern Strategy Group by Brian Hyland.

One thought on “Media Relations Strategy in Crisis: When the News Media is the News”