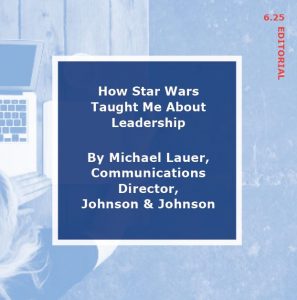 Leadership comes in many forms. While there are endless articles, videos and ‘how-to’ books about being a good leader, the truth is some people are just naturals. To break it down even further, some leaders like to be out front – highly visible, energetically motivating their teams while others tend to lead from the rear, letting his or her team speak on their behalf. Neither is wrong. So, as communication professionals how do we both adapt to and embrace these different styles?

In my role as a Communications Director at Johnson & Johnson, I have the privilege of working alongside many brilliant leaders. Most are highly experienced, well-educated professionals who are the best in the world at what they do. Often, I’m asked to “coach” them to ensure they speak or act a certain way in accordance to what we think a “leader” should be. This is wrong, in my opinion. Instead of trying to change someone’s inner voice to conform to a set of standards, I have found it better to help an individual realize what strengths they have that others truly appreciate. Are they good at public speaking? Masters at crafting a strategy? Natural people leaders? The first step in being a successful counselor is to realize where they truly shine.

On a recent trip to the U.K. to host a global town hall meeting, I was supporting two leaders of two different organizations who are now working together on a large change transformation project. To help infuse some fun by telling the story of the forthcoming journey together, we decided to use Star Wars as a reference. The original Star Wars was amazing when it first debuted 40 years ago. Now, the use of better technology and enhanced plot lines make today’s modern Star Wars movies light-years ahead of the original (pun intended!). It was clear the idea of talking about sci-fi movies during this important conversation made both leaders a little wary. But, to their credit, they went along with it.

When it was time to start our meeting – lights, camera, action! – they both showed me what true leadership is all about. We had two clips – one old and one new – queued up to open the discussion. While one leader had fun with the examples, and used them to rally the troops, the other very eloquently explained how our own journey would be nothing short of amazing. It also helped that both were Star Wars aficionados who spoke the language! Together, they not only delivered the messages, but managed to inspire our colleagues while simultaneously having fun during what would otherwise be a very serious discussion.

Afterwards, the feedback from the crowd was overwhelmingly positive. Most importantly, both leaders were extremely pleased at how well the meeting went. Needless to say, so was I! Had I tried to force each of them to play a role or deliver a message they were not comfortable with the results surely would not have been as good. Their natural abilities are what made it all work.

As communication professionals, the best we can do is help those around us shine in the best way they know how. Next time you’re faced with a difficult discussion or sensitive topic, do something fun to bring out the fun in your leaders. Everyone will walk away pleased!